Last2 incorporates many improvements in the game's quality of life, and this post will be focusing on one of those, diving into detail about how it works with all its enhancements. Specifically, this article references the effects system (the status icons bar in the top left corner), known by every player, where a lot of considerable changes have been made to enhance its utility and visibility.

To begin with, new icons were introduced to better represent every existing effect in the game. One of those is the dew, as previously there were no icons to represent them visually in the interface. Analogously, the user had no quick way of knowing if the dew bonus had expired.

Likewise, another change that has been made was the possibility of making the remaining time of every single active effect visible (except those that are not time dependent, like the horse icon, love points, or Sun and Moon elixirs) second by second. Previously, the 0 minutes message would be shown when there were only seconds remaining (under a minute), with this change, players will be able to plan the exact moment to renew the effect. At the same time, another change worth noting is that, when the effect's duration has 5 seconds remaining the icon will start blinking. This way, players will be able to easily notice the end of a buff. This change can be viewed in the video displayed down below.

Another aspect to take into account is the fact that every icon will follow a specific order in the interface, based on priority. This way, permanent effects and long duration effects such as the horse, the already mentioned elixirs or the experience ring, appear in the far left side of the status bar, and the short duration ones will be displayed more to the right. Doing this, players will know in an instant where they should be looking for the effect they are checking for.

On the other hand, another problem that existed was the inability of manually removing certain buffs when wanted. For this, an option to be able to remove said effect has been added. Its use is simple, right click the effect's icon and confirm the action in the dialog window (enabled to avoid possible missed clicks). 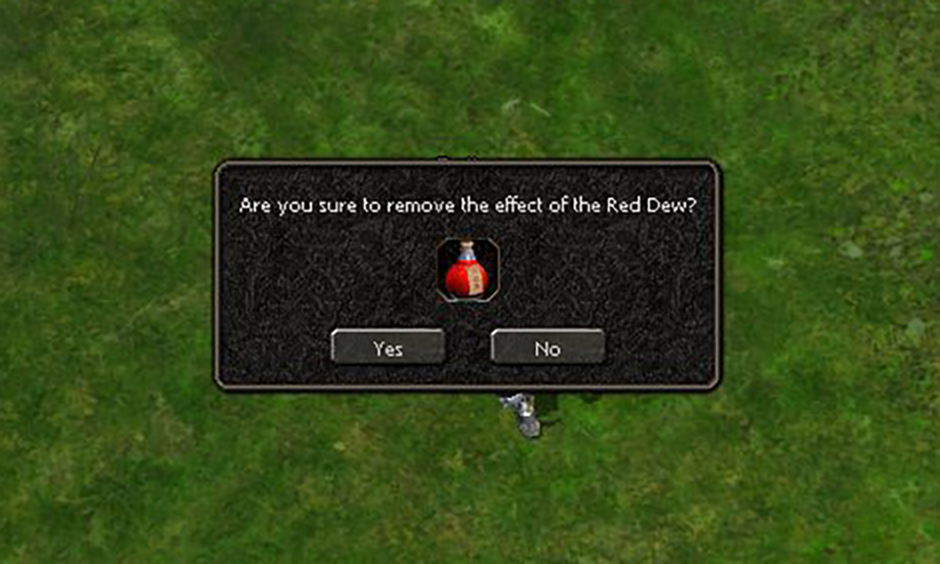 In case of having multiple active effects, the lower priority ones will be displayed in a new row below the first one, to avoid the overlapping of interfaces(that everyone hates) when an enemy, or another player, is selected. Also, in the case of being in a party, it was taken into account that some effects could overlap the interface of the party itself, so it was relocated to never lose visibility in the interface.

To conclude, this system also covers the possibility of visualizing the skill's grade (normal, master, grand master, or perfect) in the list of effect's icons. In the case of having an icon of a master skill, it will be shown in orange, or dark red in the case of grand master. One functionality of this change is the skill to see the grade of a buff that is being applied over another character. For example, a player can see the grade of Dragon's Strength that is being applied by another Shaman.

As it can be seen, there are multiple changes both visual and utility focused that were made over this preexisting system. However, as it will be shown in future posts or in the official server presentation, it will be shown that a lot more other systems have had small tweaks of this sort, making the game a lot more enjoyable and practical for the end user. A system that has had numerous modifications was the trading one, where new functionalities were introduced to avoid scams to other users.